In our previous posts we presented the tale of a high status man. Now, before we get to the next individual story, the life and death of a Bronze Age child, it is worth to review what we know about children who lived 3000-4000 years ago.

We have got used to the fact that, like history, archaeological research has focused on adult members of past communities until recently. Research of children of different historical ages has come to the forefront over the last decade, thanks in part to the work of the Society for the Study of Childhood in the Past. One of the primary sources in archaeological research is the burials of those who unfortunately died in their childhood. Occasionally, objects found in graves and settlements that fit into tiny children’s hands, are also evidences of children of the past. An illustrative summary of Bronze Age children’s toys was recently published on the website of the János Damjanich Museum (Tárnoki 2017).

Unfortunately, it is often impossible to prove if the small vessels, clay animals of wagon models served as toys for children. And of course, a significant part of the toys, made of organic material, could not survive in the soil conditions of the Carpathian Basin. However, children could be not only users but also creators of the surviving objects. Through macroscopic and microscopic observations, the “hands” and fingerprints of one-time children can be identified on clay finds. In the case of small, simple-shaped, unevenly crafted pottery, these are probably the first attempts as “potters”, which over the years have become more and more advanced and they have been able to create more complex, more intricately decorated pots (Fülöp 2016; Gucsi–Szabó 2018). 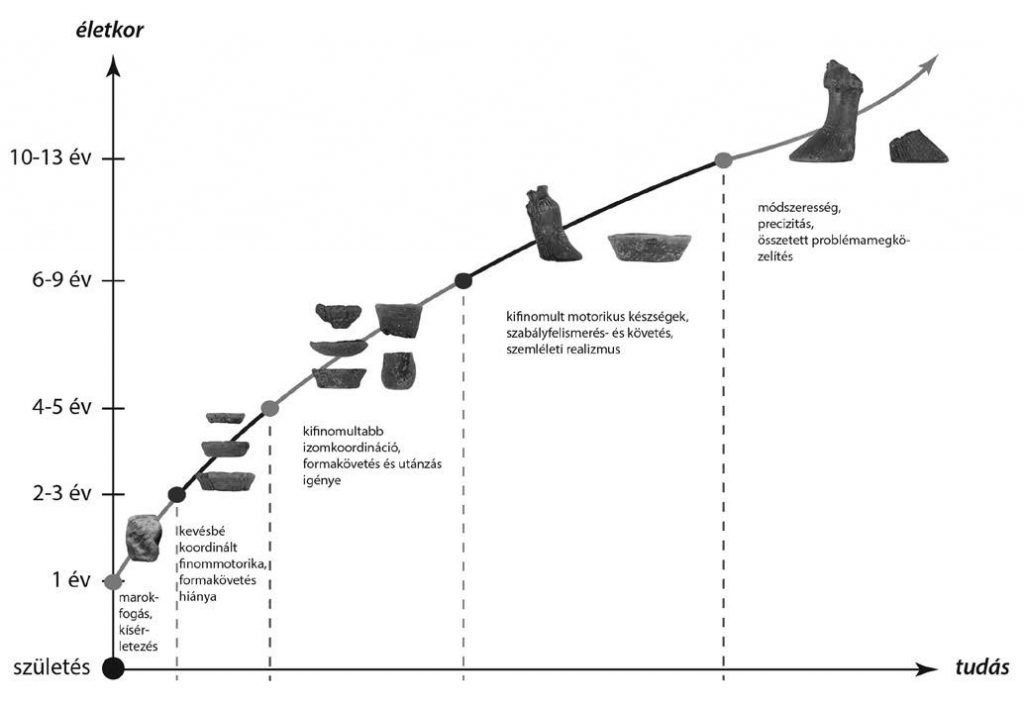 Late Bronze Age clay figurines showed fingerprints of older subadults between the ages of 10 and 18, as a result of microscopic examinations (Király–Koós 2013).

Traces of solisitude care and violence?

Some varieties of miniature pots, however, could be used not only as toys but also to feed children. In the Middle Bronze Age Western Hungary, richly decorated small drinking horns, found almost exclusively in children’s graves, may have been necessary for feeding young children (Hajdu et al. 2016). According to their form, the small, so-called “feeding vessels” equipped by a pipe from the Late Bronze Age (1200–800 BC) was hypothesized to serve as the modern baby bottles. One of last year’s archaeological sensations was that inside these 3000-year-old vessels from Austria, lipid analysis detected fatty acids characteristic of animal dairy products (Dunne et al. 2019). This means that these feeding vessels found in children’s graves were indeed used to supplement the breastfeeding of toddlers with sheep or goat’s milk and helped their weaning by the age of 2–3 years.

The family often tried not only to take physical care of the deceased children, but their remains were probably also protected from harmful spirits with some objects. Although the identification of protecting amulets in prehistoric burials is often questionable, such apotropaic function can be attributed to drilled animal teeth based on ethnographic and historical analogies. These teeth necklaces may have depicted the animal itself and main characteristics of it. Some features of the animal may have provided symbolic protection for the wearer of the jewelry made of teeth (Choyke 2010). In the Early and Middle Bronze Age of Western Hungary, animal tooth items of garment are not so common, but in many cases jewellery made from wild boar, dog and deer teeth is found in children’s graves (Tugya 2010). 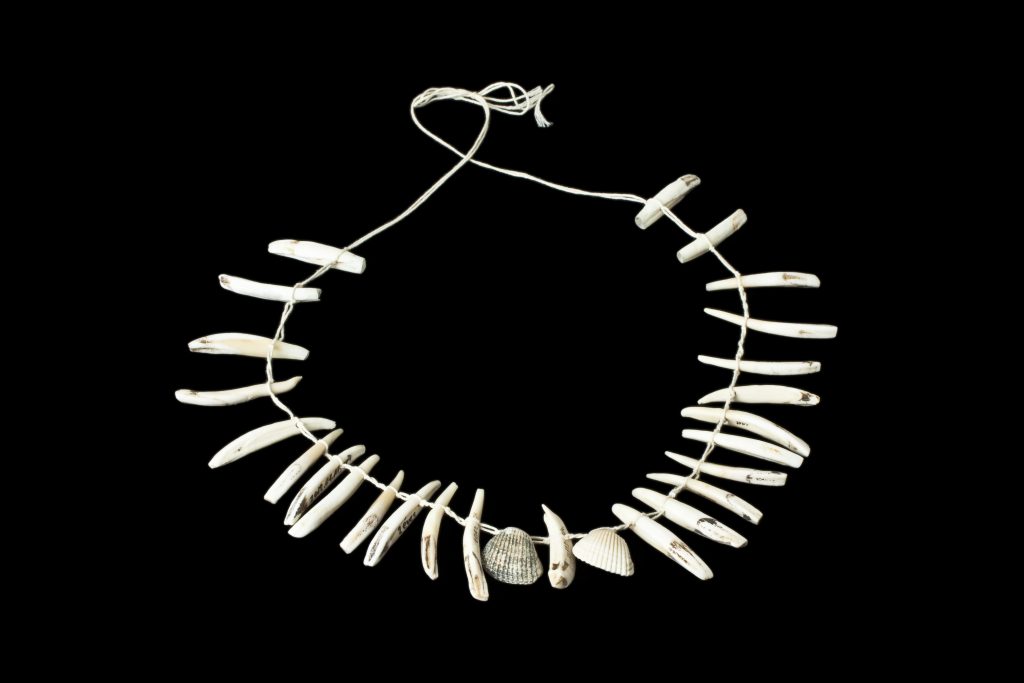 At the same time, the surviving bones of Bronze Age children also show traces of blows and cuts, that injured them before they died. Among the human remains found in the Middle Bronze Age settlement in Érd, for example, unhealed shock marks were found on the skulls of two children (Szeverényi–Kiss 2018; the multiple burials will be discussed in our later entries).

How long could the childhood last?

From a biological point of view, the answer is simple, apart from the difficulties of anthropological definition, we can consider individuals under the age of 20 to be subadults. From a social point of view, the question is more complex: due to multidisciplinary paleopathological examinations we know that burials of Bronze Age girls expecting a child at the age of 14-15 are not uncommon (Rebay-Salisbury et al. 2018). In the Bronze Age salt mines excavated in Hallstatt, Austria, small leather caps and axes suggest children workers from the age of 8. Children could participate in basket weaving and pottery making from an even younger age, as we saw above (Fülöp 2016; Reschreiter, Kowarik 2019).

Bronze Age scene from the salt mine in Hallstatt (Reschreiter, Kowarik 2019, Fig. 2)

Among the Early and Middle Bronze Age inhumations in Hungary, elements of adult women’s and men’s wear were often found in the graves of children between the ages of 8 and 12 (Melis et al. in print). Based on the costume elements and participation in the division of labor, it can be assumed that adolescents over the age of 12-14 could already be considered full members of the community. In exceptional cases, however, objects indicating social status are likely to occur in the graves of very young children, such as heavy bronze necklaces or weapons. In our next post, we would like to introduce such an elite child.

Choyke, A.: The Bone is the Beast: Animal Amulets and Ornaments in Power and Magic. in D. Campana, P. Crabtree, S. D. Defrance, J. Lev-To, A. Choyke (eds.), Anthropological Approaches to Zooarchaeology. Complexity, Colonialism, and Animal Transformations. Oxford and Oakville 2010, 197–209.

Melis, E., Hajdu, T., Köhler, K., Kiss, V.: Chapter 7 – Children in the territory of Western Hungary during the Early and Middle Bronze Age: the recognition of developmental stages in the past. In: Rebay-Salisbury, K. – Pany-Kucera, D.(eds.): Ages and abilities: the stages of childhood and their social recognition in prehistoric Europe and beyond. SCCiP Monograph Series. Oxbow Books in print.