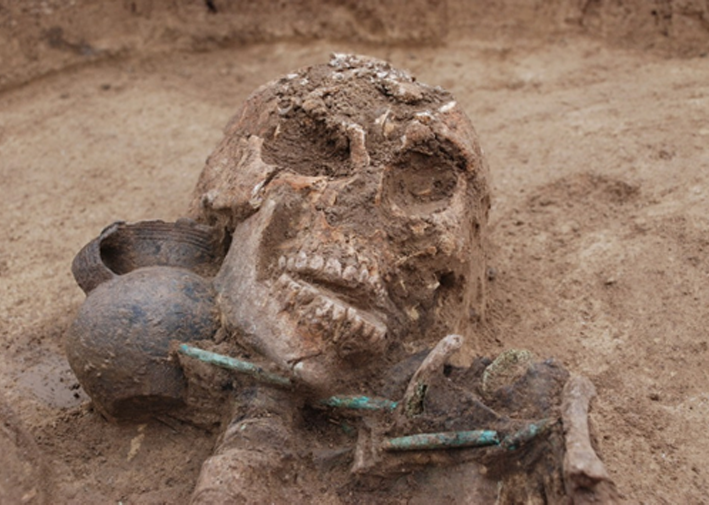 Recently, non-destructive or minimally invasive methods like aerial imagery, geophysics or applied soil sciences have increasingly gained space in Hungarian archaeological site survey methodology as well. A variety of diagnostic methods are often combined for example to clarify the spatial distribution of inhabitation periods at a multi-epoch site. These methods provide us a wide range of qualitative data about the horizontal and vertical extents, nature or function of human settlements/settlement parts before or parallel to carrying out any archaeological excavation. 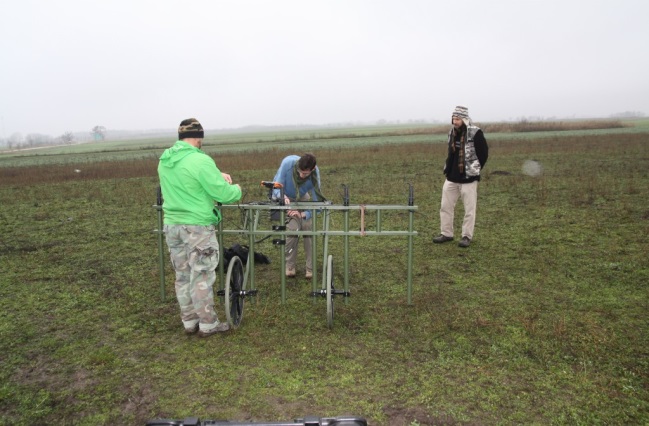 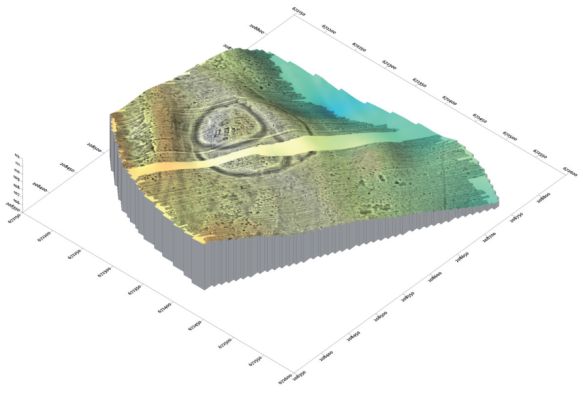 Currently very little reliable data is available to re-establish an absolute chronology for the Bronze Age in the Carpathian Basin. Due to the broad acceptance of radiocarbon dating instead of the former, so-called short chronology absolute dates of the Bronze Age moved significantly back in time. Instead of the traditional 1900 BC date the beginning of the era has recently been related to a transition period between the Copper Age and the Bronze Age (between 2800-2600 BC). The end date of the Middle Bronze Age has slightly been modified: rather than about 1350 BC, a date around 1500/1450 BC is now accepted. In the framework of our research project, we are AMS radiocarbon dating samples mainly from burials (AMS is an advanced method compared to former radiocarbon dating techniques). As a part of the basic research conducted with the staff of the Hertelendi Laboratory of Environmental Studies (HEKAL), Institute for Nuclear Research of the Hungarian Academy of Sciences (MTA Atomki), we also date calcined bone samples from cremation burials. 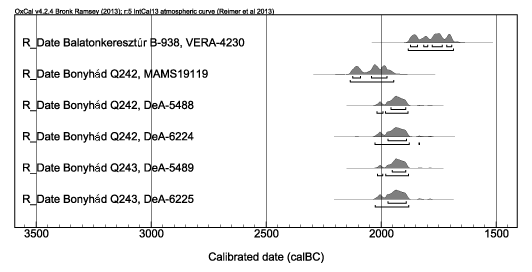 During the classical physical anthropological analysis (determining the biological sex and age of the deceased, biological reconstruction of a given population) we are looking for once existing similarities and differences between various populations in terms of general health status and lifestyle by systematic palaeopathological analysis. In doing so, each individual is examined using the same protocol: we are looking for sings of porotic hyperostosis referring to nutritional deficiency, degenerative joint and spinal diseases, periostitis, bone marrow inflammation, traumatic lesions or osteological signs of repetitive strain injury. All of this is well supplemented by palaeostomatic analysis that provides information on the nutrition, food composition – basically on the lifestyle of a specific population. 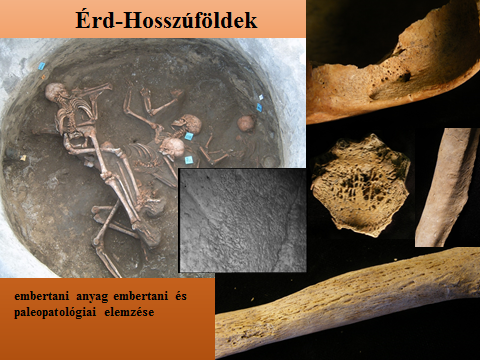 In the past few decades, strontium and oxygen isotope analysis allowed us to reconstruct population movements by distinguishing between local and non-local individuals. The method examines the ratio of the strontium and oxygen isotopes (87Sr/86Sr, δ18O) assessed by the human organism through the food chain (from the food they consumed and the water they drank) or through the atmosphere. By comparing the proportions of trace elements within the tooth enamel (containing elements permanently incorporated during childhood), the bones of the adult to those observable in the soil from the find spot, we can state if a person has significantly changed location during their lifetime.

In the case of non-local populations, information on the starting point of migration can be gained by examining stable isotope maps of a wider region around the Carpathian Basin. A few studies has already been carried out concerning the Bell-Beaker Culture around Budapest that confirmed the success of the method and projected the important conclusions from the planned sampling so far. By carbon and nitrogen stable isotope analysis, data can be obtained on the diet and lifestyle of human populations or livestock, based on the results of a former research regarding Neolithic and Copper Age populations of the Carpathian Basin, carried out by a German-American research programme.

Molecular genetic analysis of the skeletons from Bronze Age burials became an essential component of the research process needed to examine population mobility, kin origins and relationships. Analysis of mitochondrial and Y-chromosomal haplotypes can help answering questions like: Can the difference between Bronze Age cultural units and related cultural phenomena be rooted in genetically diverse populations? How can we describe the relationship between these groups either chronologically or geographically? Our research is closely related to archaeogenetic results of the Neolithic and Copper Age of the Carpathian Basin and the Late Neolithic and Early Bronze Age of Germany. By comparing to these, we can interpret the Early and Middle Bronze Age DNA data from the Carpathian Basin in relation to major European archaeological cultures (Bell-Beaker culture, Corded Ware culture, Aunjetitz/Únětice Culture).

Our ‘Lendület’/Momentum Research Group has joined the genome-wide studies of a new genetic research project launched in 2015 by the HAS RCH Institute of archaeology in cooperation with the Department, Genetics of the Harvard Medical School („Kulturális átalakulások genomikai kutatása a Kárpát-medence 4000 éves őstörténetéből /Genomic exploration of cultural transformations over 4,000 years of the Carpathian Basin’s prehistory”, project leaders: Anna Szécsényi-Nagy, David Reich) in connection with preparing samples and examining relative/absolute chronological and archaeological questions. For example, the recently identified genetic link between the Middle-European Bell-Beaker culture and the population of the Iberian Peninsula, as well as the mitocondrially certified immigration of the Bell-Beaker People to the territory of the present-day Germany casts new light of the archaeological interpretation of this controversial cultural phenomenon spreading even to Hungary.

During the DNA analysis, new generation sequencing (NGS) methods are used for whole genome sequencing. Analysis of samples begins at the pre-PCR division of the Laboratory of Archaeogenetics, HAS RCH IA. During the procedure, the sample gets pulverized after decontamination protocols. This bone/tooth powder becomes the starting point of DNA isolation. DNA libraries that preserve the ancient DNA content of bones are prepared from the isolates. DNA library types currently produced at our laboratory may serve as a base for repeated human and pathogen tests.

At the second phase of the study, some of the DNA libraries prepared at Budapest are sent to the laboratory of the Harvard Medical School (Boston), where nuclear DNA capture via hybridization takes place. During this procedure, we analyse the whole genom at 1240  thousand positions. This series gives us a chance to carry out a far more in-depth research on the population genetics of Bronze Age groups.

In order to understand Early and Middle Bronze Age society it is essential to learn the main principles of their burial rites – the rules that may have been defined by family relationships from the Late Neolithic Period on as well . Thus, another aim of the ‘Momentum’ Mobility Research Group is to determine if there is any kinship between the so-called special or settlement burials and the ‘traditional’ burials of the same site (e.g. Érd – Hosszúföldek, Balatonkeresztúr – Réti-dűlő). We strive for performing data that are comparable to the results of the interdisciplinary research on samples from Early Bronze Age Aunjetitz-culture sites in Germany. 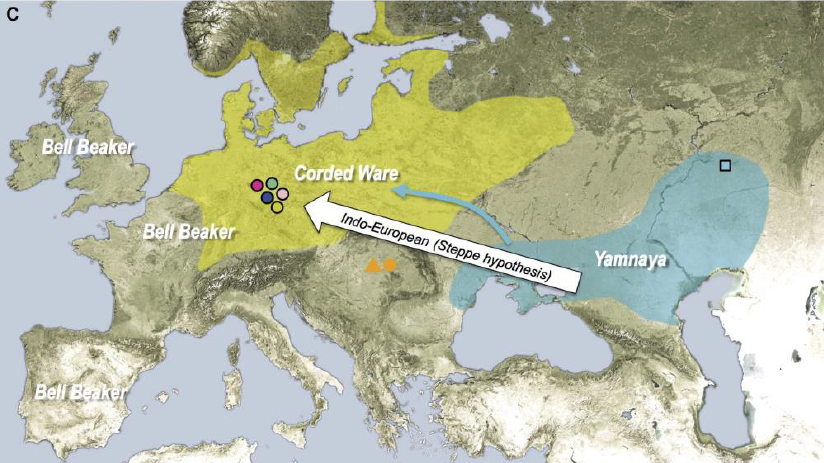 X-ray fluorescence analysis of trace elements detected in bronzes (e.g. silver, arsenic, antimony, cobalt, nickel or bismuth) provides a starting point to determine the origin of the raw materials as these components can be found in the raw copper after smelting the ore. In order to gain a better understanding of both the element composition and the production techniques (bronze casting and subsequent metalworking methods) we mainly apply non-destructive testing methods such as PGAA (neutron capture prompt-gamma activation analysis) or TOF-ND (high resolution time-of-flight neutron diffraction), taking into account aspects such as heritage protection and conservation. Based on the results of non-destructive testing, destructive archaeometallurgical analysis is performed only in particularly justified cases. 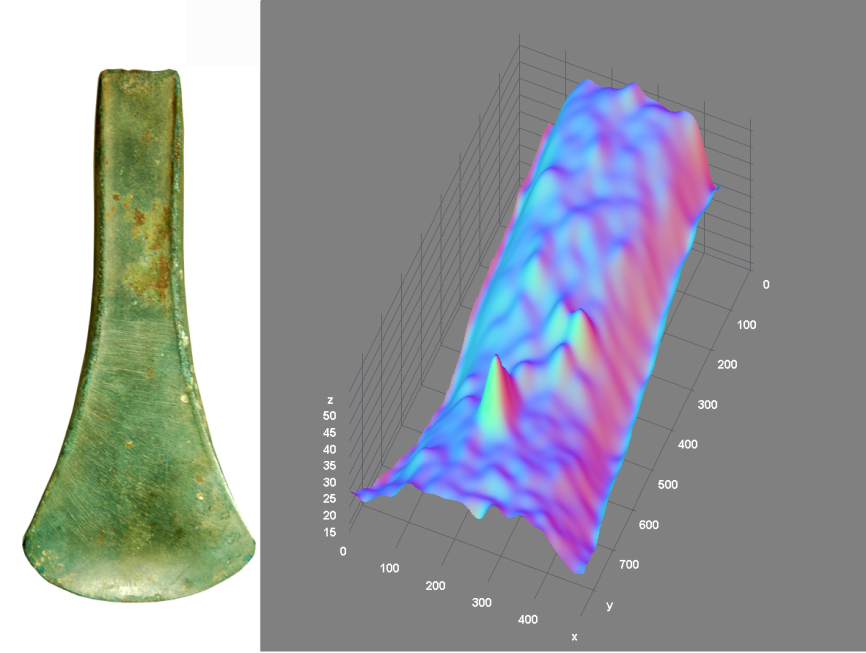