Bronze Age embodied 2.2. A high-status child from the Rába region

Small bronze daggers, usually equipped with wooden handles, are common in the burials of Early and Middle Bronze Age high-status men buried with golden hair rings. Based on this fact, these weapons may be interpreted as indicators of outstanding social status, as we could see in the cemetery of Nagycenk (Gömöri et al. 2018; Szeverényi–Kiss 2018). The dagger with the broken tip shown below, however, was found in the grave of a 4-6 year old child in Ménfőcsanak, in the vicinity of Győr (Melis 2015; Melis 2016).

Left: Dagger from grave 10695 from Győr-Ménfőcsanak-Széles-földek site during the excavation and after restoration (photo: Ferenc Halász and Tibor Takács), right: steps of making a replica of an early Bronze Age dagger (after Frank Trommer)

Where and how the grave of the child buried with the dagger was found?

We carried out a preventive excavation on 27.7 ha at the well-known Győr-Ménfőcsanak-Széles-földek site with the staff of the Field Service for Cultural Heritage and then the Hungarian National Museum, Centre for National Cultural Heritage from 2009 to 2011. The Old Rába river section, which currently turns northwest of the site, formed the alluvial bar inhabited in several archaeological periods, bordered by swampy floodplain meadows from the west and northeast before the river regulation (Ilon et al. 2016). 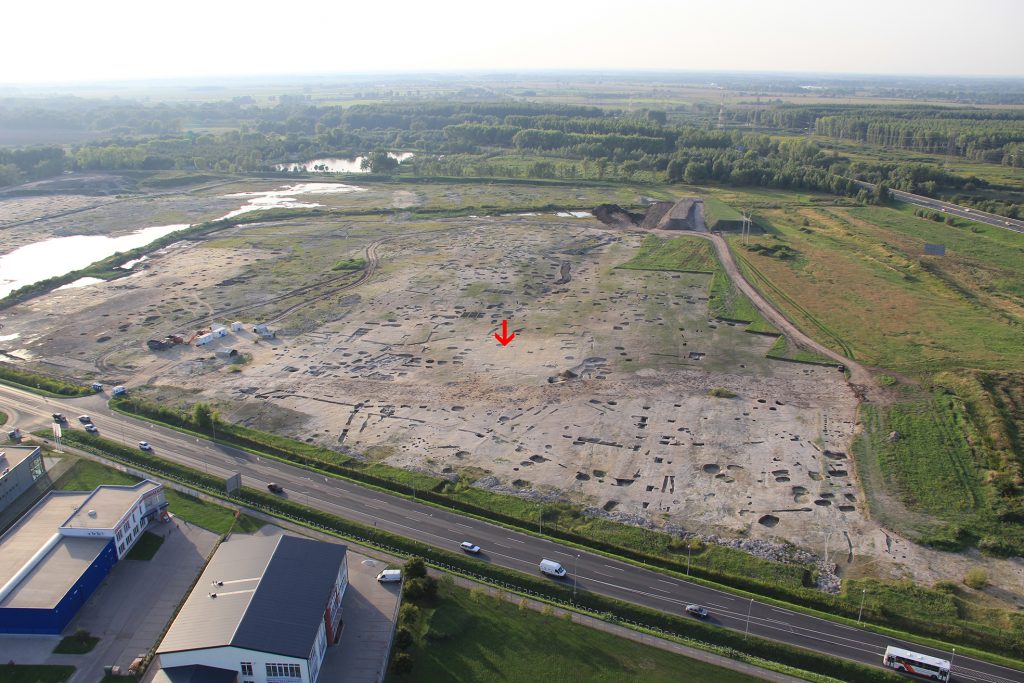 Győr-Ménfőcsanak-Széles-Földek, excavated area with the location of grave 10695, from southeast. In the foreground: Road 83, on the right side: Motorway M1, and the bend of the Old Rába can be seen among the trees in the background (photo: Gábor Rákóczi)

In the excavated area that is located closer to the M1 motorway, Middle Bronze Age inhumation graves were found. Among the burials (graves of a man, two women, three children), grave 10695 presented here was disturbed by the foundation of a dwelling built in the Roman period. Metal objects were placed in all children’s graves, and grave 10695 contained most of the grave goods, while only a bronze pin was found in the burials of adults.

The Bronze Age burial, disturbed by the construction of a Roman dwelling, belonged to a child aged 4–6 years, according to the physical anthropological analysis (Tóth et al. 2016) 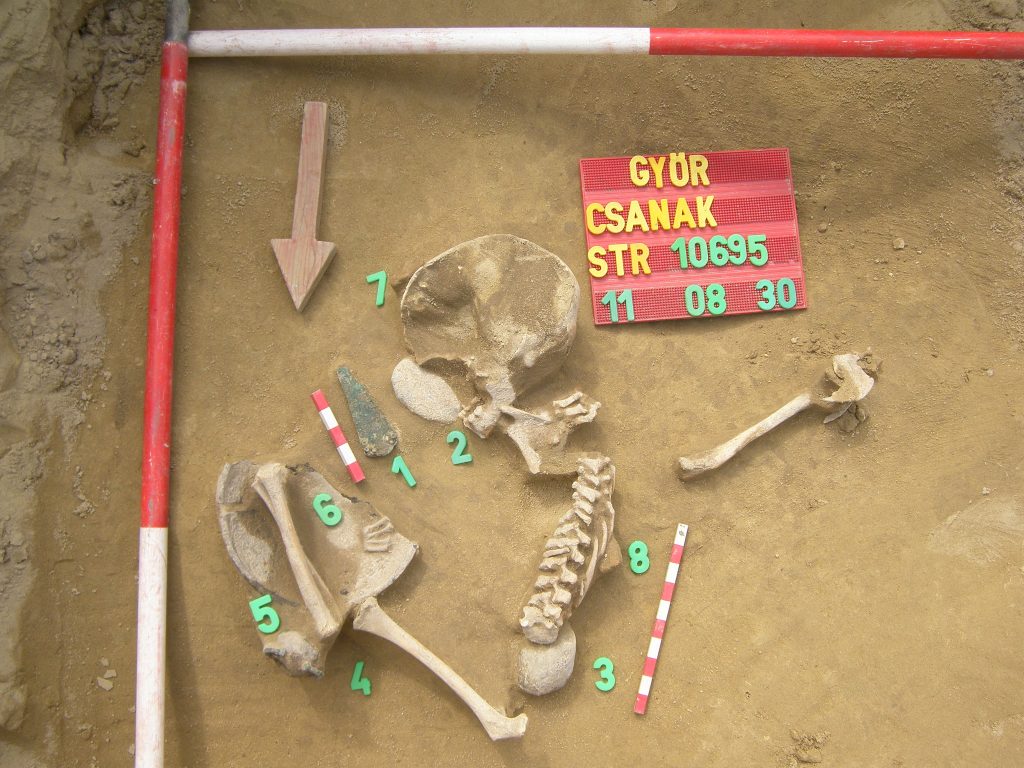 The dagger was positioned with its tip up in front of the child’s face; traces of the wooden handle were still visible at the rivets during the excavation. The location and fragmentation of the dagger suggests that it was not placed as an article for personal use in the grave, but was deposited as a symbolic object by the relatives of the deceased child. The dagger was made of tin bronze, similar to the tools and weapons of the Balatonakali chief; further lead isotope studies can help to identify the provenance of its copper raw material. Under the child’s face and at the location of his pelvic bone, a multifunctional tool made of a large pebble was found. Remains of earth paint lumps were found at the top of the skull and under the spine (Melis 2015, 2016).

Stone tool made of a pebble, and red ochre lump at the skull (photo: Ferenc Halász)

A bowl and a small cup with a bracelet (a small-scale variant of a neckring with rolled ends) were found at the leg of the deceased. 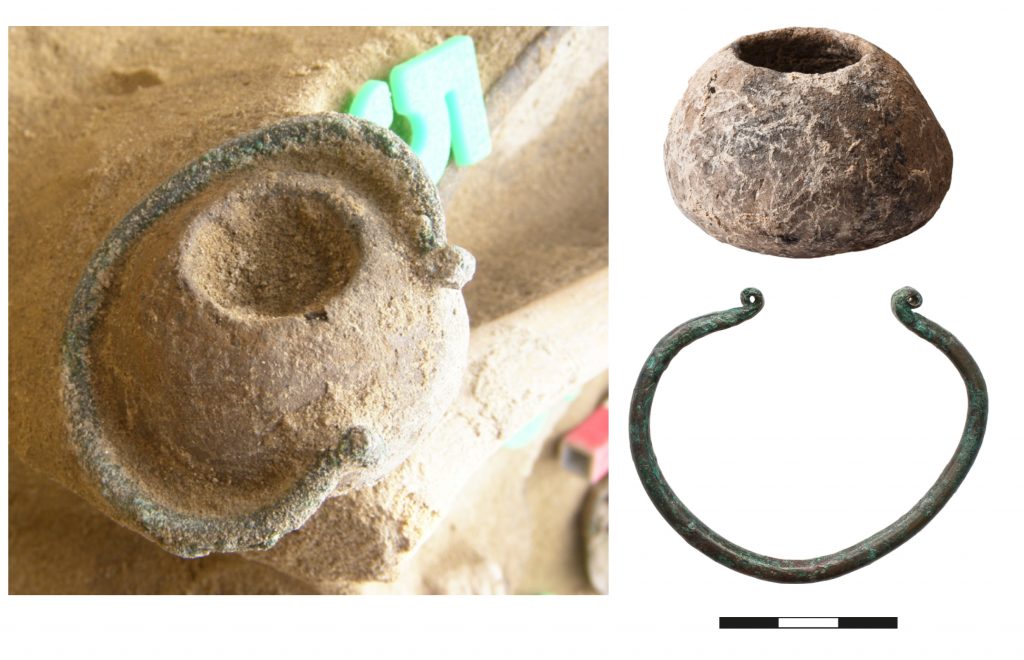 Small cup with bracelet at the leg (photo: Ferenc Halász and Tibor Takács)

When and how did the child live?

The anthropological examination performed on the fragmentary remains of the child did not reveal any signs of illness or injury, so we can only guess the cause of his early death. However, under the age of 8-9 the very high mortality of children can be expected in this period. Traces of malnutrition and deficiency diseases are common on the better preserved bones of Bronze Age children, of which child burials with rich grave goods are no exception (Schultz 2001).

The small group of graves unearthed in Győr-Ménfőcsanak, similar to the cemetery of Nagycenk presented in our previous entry, belongs to the Gáta-Wieselburg culture. However, the orientation (S-N) and the pottery style of this child buried with a dagger is closer to the cemeteries excavated in the areas of southwestern Slovakia and Moravia, than to the burial customs of the Lake Neusiedl region. The nearby rivers (Rába, Danube) were important communication channels towards the mentioned Middle Danubian areas. The sex of the buried boy was confirmed not only by the weapon as a grave good, but also by genetic tests performed in the Laboratory of Archaeogenetics, Institute of Archeology, Research Centre for the Humanities. Population genetic analyses can later provide answers for questions about the child’s origin by comparing his archaic DNA data to other European aDNA samples. Based on the type of the bracelet and the dagger, the burial can be dated to the 2nd period of the Middle Bronze Age in Hungary. This dating was supported by the AMS radiocarbon measurement of his bones: the child was buried most likely between 1880 and 1770 BC.

The deceased of the small burial group from Győr-Ménfőcsanak can be interpreted as an elite family or household, based on the frequency of metal artifacts. Beside the mentioned ornaments a rare silver hair ring was also found in another child burial. The valuable grave goods, placed in the graves of children, suggest that the family who buried them may have sought to pass on their social and/or economic power. 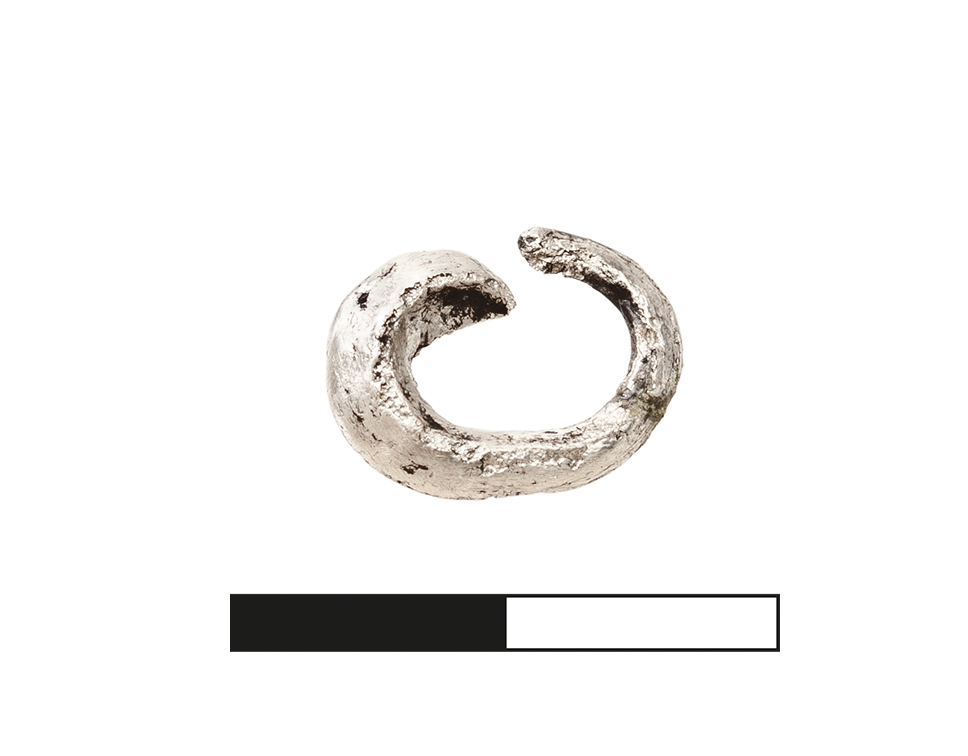 Efforts to inherit power are important features of social transformation – with the consolidating leadership of individual families, suggest that Bronze Age communities developed towards chiefdom type of organization. The little boy buried in the outskirts of Győr-Ménfőcsanak may have been the child of such a local leader or chief.

I would like to thank Gábor Ilon, the leader of the excavation for the opportunity to publish the finds, as well as for the help of the excavation team’s (Ferenc Halász, Ciprián Horváth, Lajos Sándor, Pál Skriba) and colleagues’ work during the processing of the finds from the cemetery (Hajnalka Binder, Katalin T. Biró, Szilvia Döbröntey-David, István Eke, Zoltán Kovács, Gábor Nagy, Tibor Takács, Gábor Tóth).