A research visit in Mannheim: the status and new possibilities of studies on Bronze Age metal supplies with NKFIH ERC MOBIL grant

ERC MOBIL 127768 grant of the National Research, Development and Innovation Fund supported Viktória Kiss, leader of the Momentum Mobility Research Group, to spend three months in Germany from May to July 2018. The study tour provided an opportunity for closer cooperation with the participants of the ERC Research Program BRONZE AGE TIN: Tin Isotopes and the Sources of Bronze Age Tin in the Old World (2013-2018), jointly lead by the University of Heidelberg and the Laboratory of the Curt-Engelhorn-Zentrum Archäometrie (CEZA gGmbH) Mannheim. 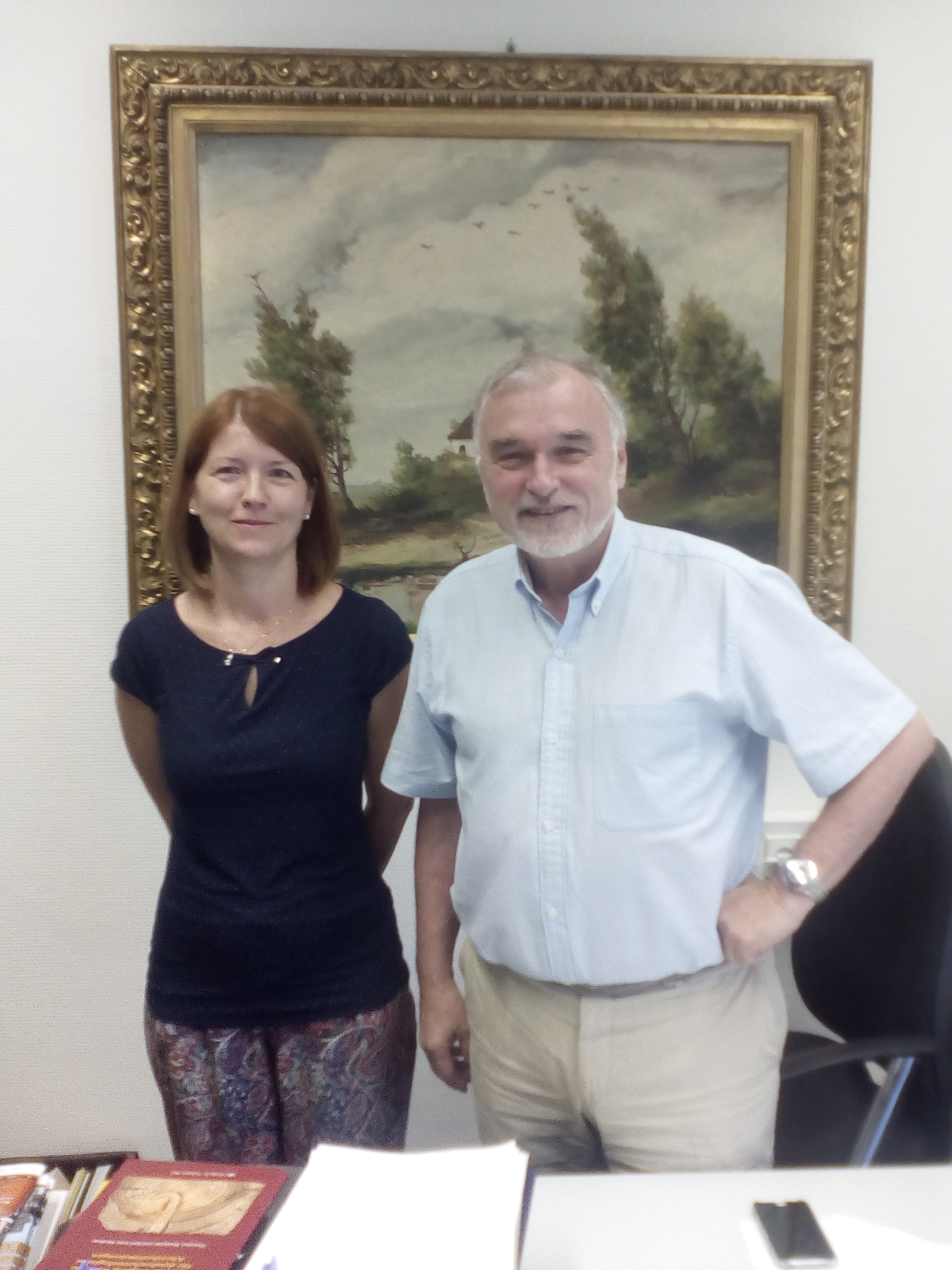 The meeting of Ernst Pernicka, leader of the Bronze Age Tin ERC Project, Scientific Director of Curt-Engelhorn-Zentrum Archäometrie and Viktória Kiss in Mannheim 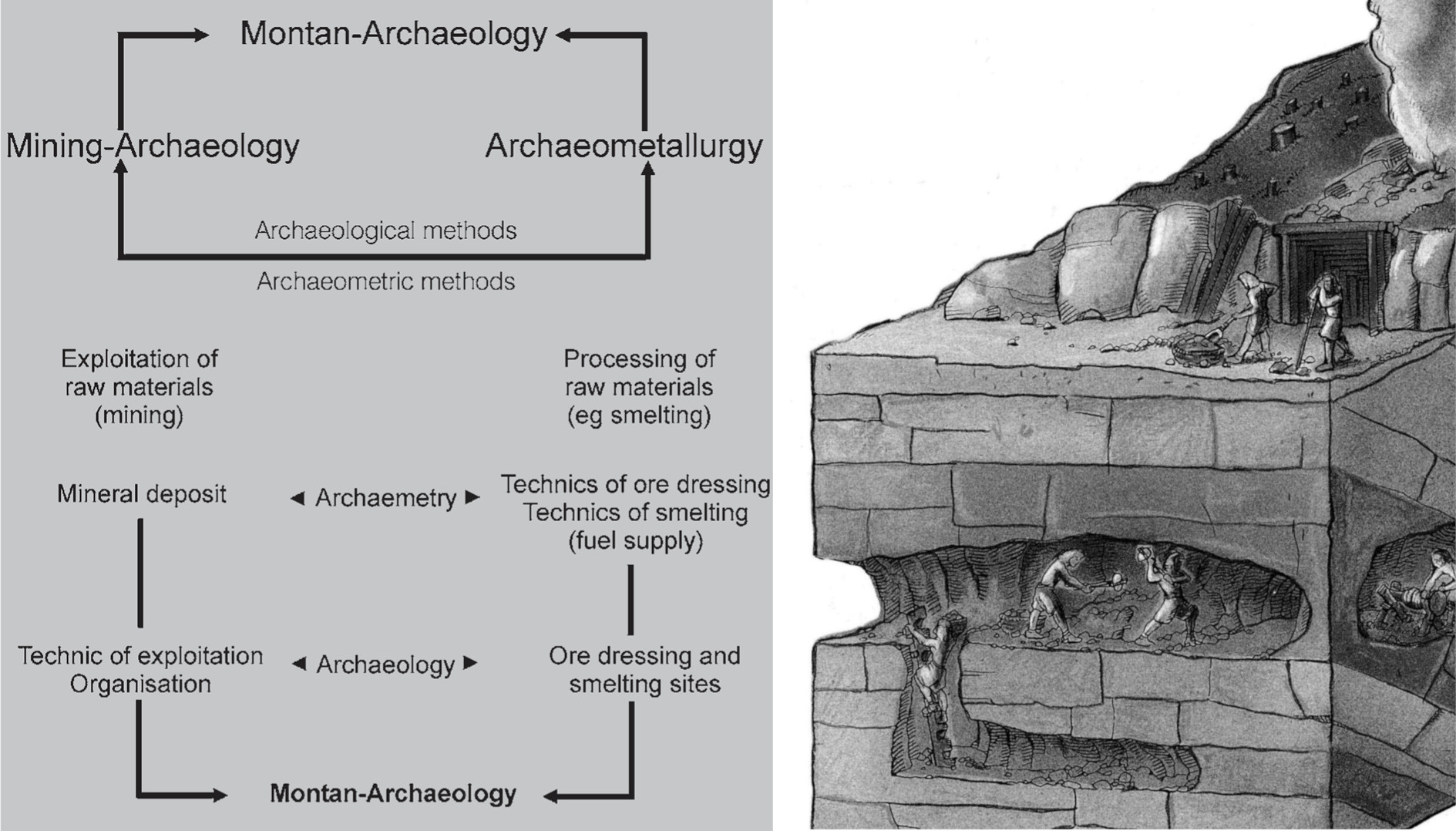 Mining-archaeology and archaeometallurgy in definition as “montan-archaeology” (Stöllner 2008, Fig. 4) and the model of a Bronze Age mine with shafts and fire setting (Krause 2009, Fig. 3)

The research of Eurasian copper raw material sources has revealed many important data, although we still have open questions regarding the origin of copper ores used by Bronze Age metalworkers. Accurate analyses of copper raw materials (used for making bronze artefacts of the era) are aimed at the determination of the original ore sources. The provenance of tin used to produce tin bronze artefacts (appearing in the 3rd and 2nd millennium BC), however, was long unknown. The above mentioned ERC project has aimed a detailed examination of the question. The visiting grant of Viktória Kiss gave way to thoughtful discussions with the project leader Professor Ernst Pernicka as well as with Bianka Nessel, the fellow archaeologist responsible for the Carpathian Basin and the Southeastern European region. 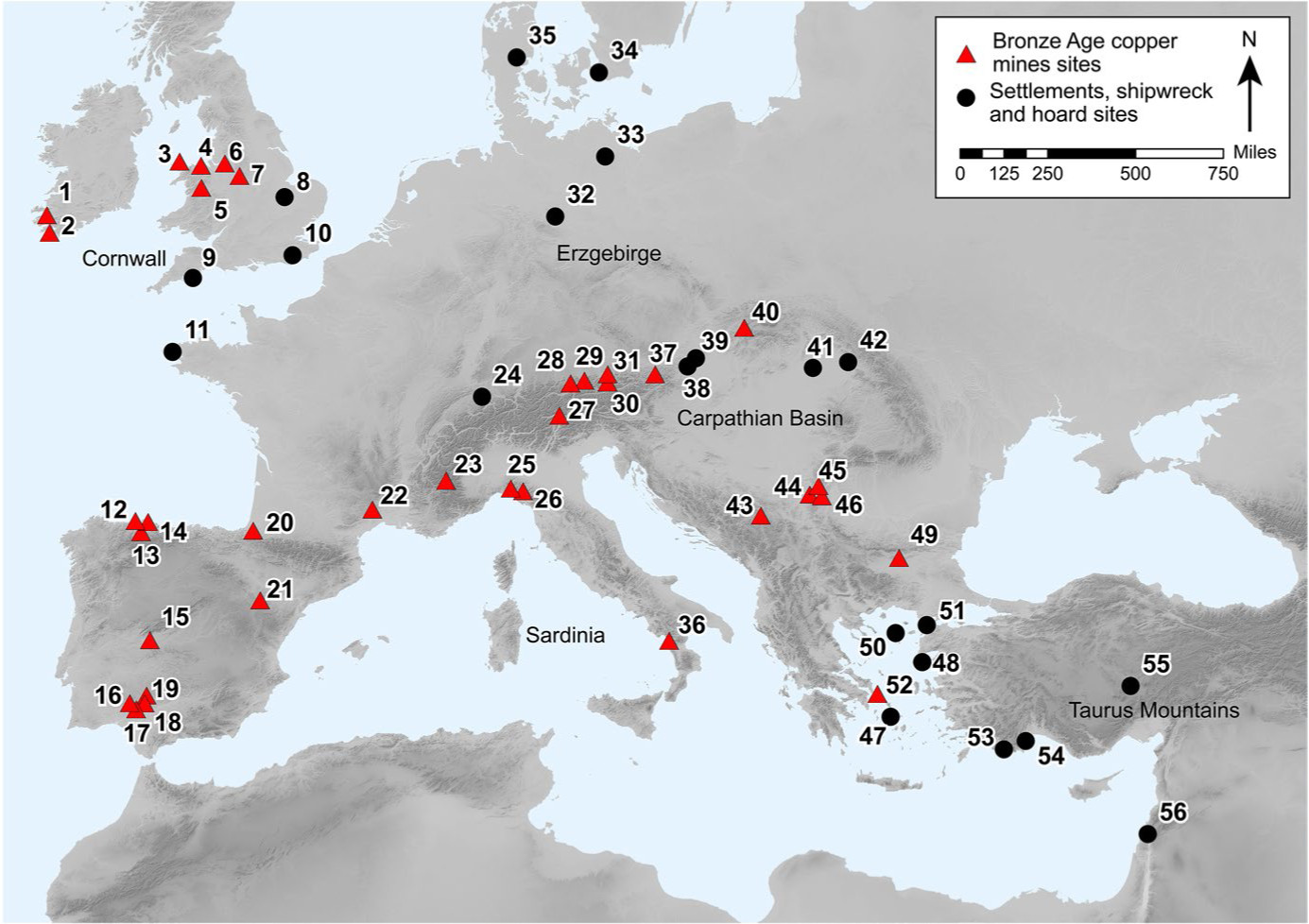 An overview of Chalcolithic and Bronze Age copper mines (Δ) in Europe together with settlements, shipwreck, and hoard sites (o) (after Radivojević et al. 2018, Fig. 1)

Previous analyses, initiated by German archaeologists, targeted weapons which could be linked with the find assemblage of the famous Nebra Sky Disc dating to the 16-15th century BC, discovered in the region of Halle (Northeastern Germany). In connection with this, five axes of the contemporaneous Hajdúsámson treasure as well as the decorative sword and battle axes of the hoards from Téglás and Vámospércs were investigated (Dani et al. 2013).

The swords, axes and the chisel discovered together with the Nebra Sky Disc (1: https://www.lda-lsa.de/en/nebra_sky_disc/); the artefacts of the Hajdúsamson treasure and the sword and the axe from Téglás (2: Dani et al. 2013, 1. ábra, 6. ábra)

According to the elemental analysis, the axes of the Hajdúsamson treasure, the axe from Vámospércs and the hilt of the Téglás sword – similarly to the material of the Nebra Sky Disc – all match the so-called Eastern Alpine copper. This ore, containing arsenic and nickel is originated from the Mitterberg region, south of Salzburg. According to the most recent radiocarbon dates, these ore sources were exploited in the 16-14th century BC. The raw material of the axe and the sword blade of the Téglás treasure, however, differ from that (Pernicka 2013; Pernicka et al., 2016a).

Trace element concentrations in copper of the artefacts of the Hajdúsámson treasure (marked in red) and of the hoard from Téglás (blue) compared to the elemental composition of the Eastern Alpine ore sources (Pernicka 2013, Fig. 4)

Results of lead isotope analysis indicate that the Téglás weapons with discrepant silver and antimony values could have been made from ores exploited in the Slovakian Ore Mountains (Pernicka 2013).

Recently, more and more lead isotope analysis results has became available from the surrounding countries, dating between 2000/1900 and 1500 BC (contemporaneous with the Hungarian Middle Bronze Age). 32 samples from two archaeological sites in present-day Austria illustrates the mentioned period. The results completed the research implemented in the 1960s and 1970s in Stuttgart (Studien zu den Anfängen der Metallurgie project; Schubert-Schubert 1967). The raw material of the older artefacts (dating between 2000/1900 and 1600 BC) could be identified as the so-called Ösenring copper, characterised by silver, arsenic and antimony content and named after the raw material typical for neckrings (Ösenringen), while younger pieces (dating after 1600 BC) were made from Eastern Alpine copper. Lead isotope tests aiming a more accurate provenance determination indicate that the raw material of the older artefacts certainly derived from the Slovakian region, while the Eastern Alpine metal type can be related to the Mitterberg mines (Duberow et al. 2009; Radivojević et al. 2018, Fig. 7). From the territory of present-day Romania, the Apa treasure characterized by Hajdúsámson type swords and further 40 samples from Early, Middle and Late Bronze Age tools and weapons were investigated. The results suggest that in addition to Alpine and Slovakian raw materials, ores from local sources (from the area of ​​Baia Mare, and from the Apuşeni Mountains) were also processed (Pernicka et al., 2016b). Changes in raw material use over time show similar tendencies to those in Austria. 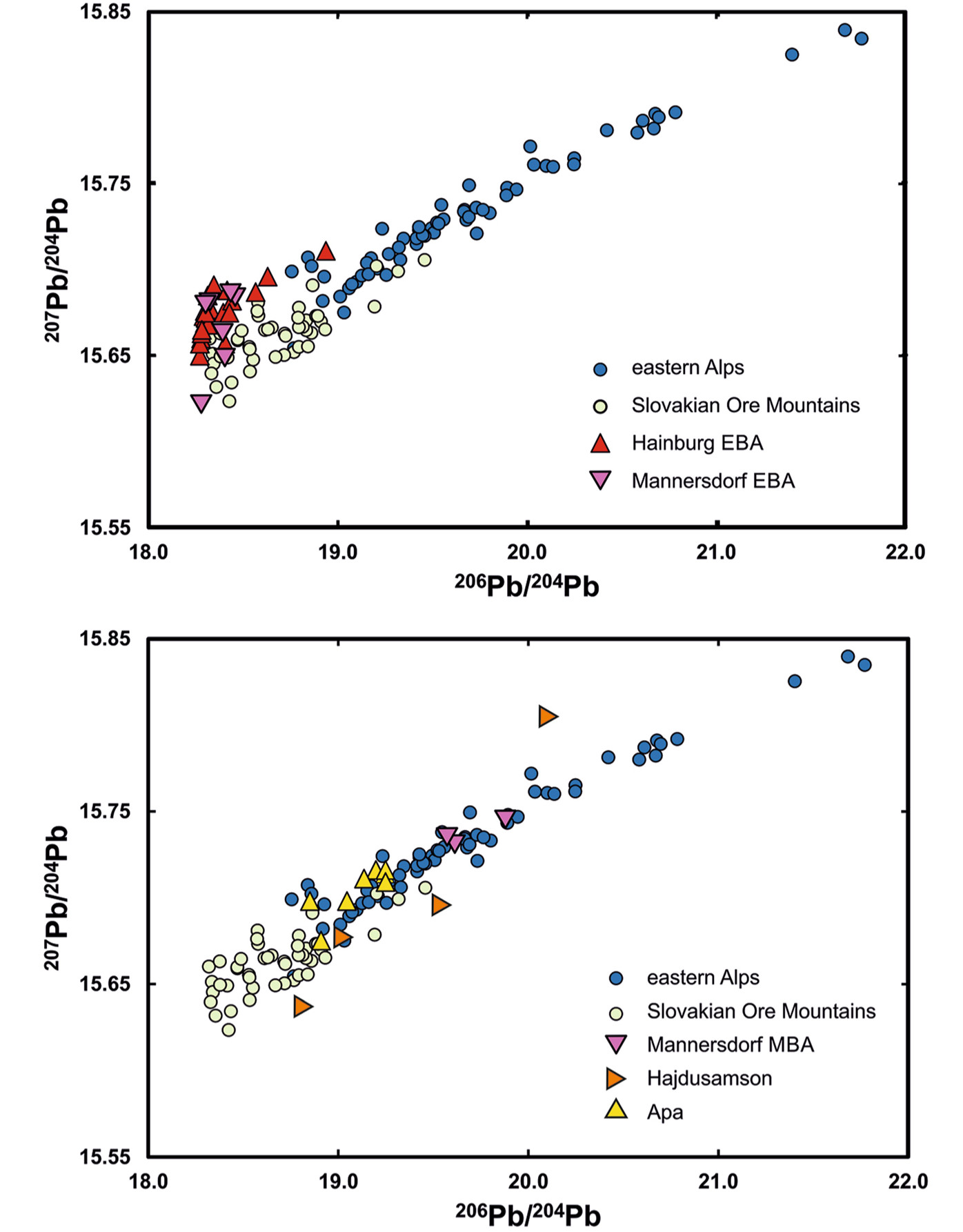 Sampling project of the Untersuchungen zur Vermittlung der Zinnbronze nach Mitteleuropa über das Karpatenbecken lead by Ernst Pernicka and Tobias Kienlin in 2006, supported by the University of Tübingen, was carried out on numerous artefacts from several well-documented Bronze Age sites from Hungary. Some of the items have been tested in cooperation between the Momentum Mobility Research Group and CEZA gGmbH since 2016. The significance of the 22 (and further 20 ongoing) metal composition analysis results is emphasized by the fact that except for the above mentioned nine objects from Debrecen, no additional lead isotope data were available from the inner areas of the Carpathian Basin. Some artefact types dating between 2800 and 1500 BC refer to long distance relationship networks. For example, the half-sleeved axe (Schaftlochäxte mit Schaftrücken) of a high status man buried at Balatonakali (Torma 1978; Kulcsár-Kiss 2016) has clear typological parallels in Melz in Northern Germany and in the Slatina region, Southeastern Romania. In the case of the axes from Balatonakali and Melz, the question has already arisen as to whether these artefacts were manufactured at and exported from the same workshop or they are locally made copies that indicate long distance connections between Bronze Age communities (Kovács 1995, David 2013, Stockhammer 2017). Our recent results suggesting the use of copper ores mined in the territory of present-day Slovakia are of relevance to the research on Central European Middle Bronze Age raw material supply system (Kiss et al. in prep.).

The location of the known copper ore sources in Europe (Pernicka et al., 2016b, Fig. 14) and the finding place of copper and bronze artefacts studied by the Momentum Mobility research project (indicated by green)

Thanks to the collaboration with the Bronze Age Tin ERC project, the first Hungarian tin isotope data are also being evaluated. Thus we may soon be able to establish the source of alloying material used for making tin bronzes appearing around 2000/1900 BC (the Erzgebirge along the modern border between Germany and the Czech Republic, Eastern Slovakia, the Balkans or the British Isles; Brüggmann et al., 2017, Nessel in prep.).

The visit may also contribute to the successful preparation and implementation of international proposals for further research based on combined archaeological and scientific methods.

Nessel, B.: Invention and adaption of tin bronze metallurgy in south-eastern Europe. In: Proceedings of the Bronze Age Tin. Geological sources, production, and distribution of tin in Bronze Age Eurasia. International workshop from 14 to 16 March 2018. at the Reiss Engelhorn Museums in Mannheim, Germany, in prep.